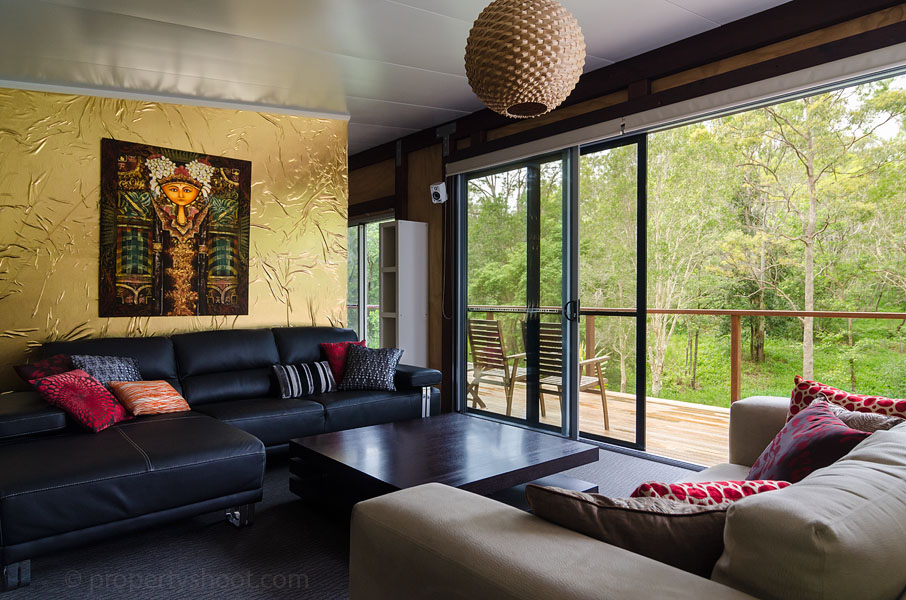 I photographed this funky owner-built cottage recently. He told me that the design had evolved as demolition materials came to hand. Not being your usual ‘2-pack and tiles’ I was sparing with the flash and post-processing to retain the quiet country mood.

Real estate photographers spend so much time with their butts jammed into a corner I’m surprised we aren’t wedge-shaped! It’s all in the attempt to capture as much information as possible about a space. To me, wide shots, though essential as part of a mix of RE photos, provide information at the expense of emotion. They don’t convey a lot about the ‘feel’ of a home. So it was refreshing for me to be able to zoom in recently and show some of the effort put into the decor by their appointed stylist.

A recent shot of a new build. Dusk always adds a special sheen to real estate. 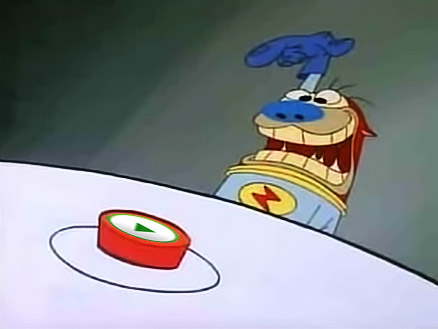 In Space Cadet Stimpy’s case (above) it was the History Eraser button that he was ordered to guard, but not touch, that proved irresistible.
The video ‘play’ symbol is another graphic convention that begs to be pushed (or clicked). The action is rewarded with entertainment. Classic Pavlovian reinforcement.

They say there are 3 types of lies: lies, damned lies, and statistics! I love stats as an indicator of trends. Always to be taken with a pinch of healthy suspicion of course. The Redfin Blog is all about analysis of patterns in real estate. And their sample sizes are certainly large enough to give some confidence that the patterns they identify are real. But as always, identification of causal factors, and extrapolation of trends should be a matter for one’s own judgement.

Rather less expensive than full motion video, a ‘pan and zoom’ slideshow gives a sense of movement by moving a virtual camera across and into (or out of) a still image. It’s not true video; trees & water won’t move in the wind for instance, although there is opportunity to intersperse real video between the still shots.

Yet another marketing option for the toolbox.

If you’re a sports fan you may have seen TV cameramen scuttling down the sideline, following the action with their camera mounted on a framelike contraption which is itself supported by a body harness. That’s a steadicam, a device designed to absorb the ‘bobbling’ motion imparted to the camera by the cameraman’s own movement. The result is smooth, almost floating, footage. If you’ve ever walked with a full cup of tea (anyone?) you’ll appreciate the challenge of keeping that liquid surface motionless.

I recently purchased a small steadicam, scaled down for my camera. What a fiendishly frustrating device! Right up there with the rubber frypan!! However, just the tool for transitioning the camera between ‘scenes’, or rooms in the house.

Have a look at the ‘walk-through style’ video below which consists mostly of steadicam sequences, along with a dashboard intro! 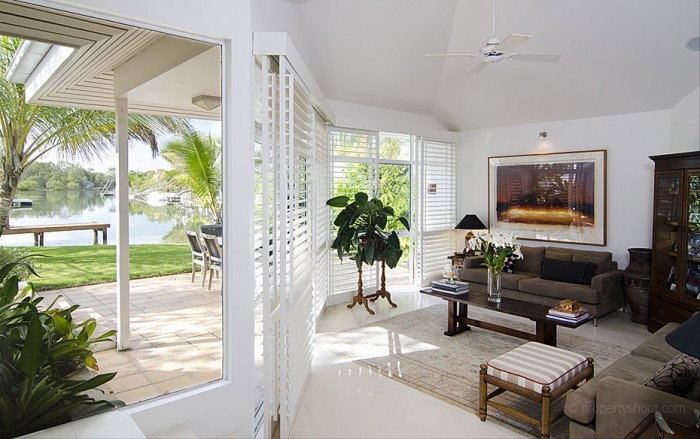 This one was worth arriving early for. Sun streaming in, heron stalking the water’s edge and the ‘bloop’ of little fish breaking the surface. Technically the challenge was to avoid distracting reflections in the windows, and mitigate the light fall-off into the room. Before the addition of two flashes, the right side of the room was seriously dark!

A recent survey found that …

Why use video to market real estate?
1) video is engaging. It will hold a viewer’s attention longer than a static photo.
2) by telling a story appropriate to a target demographic, video can create an emotional hook between the content and the viewer.
3) video can deliver not only the spatial flow of the home, but also include the sounds of the home, further evoking emotional response. Great for the long-distance buyer.
4) video distribution via Youtube and social media sites increases the visibility of any given property from a search engine standpoint.
5) video boosts the agent’s own brand power, in part by showing that the agent is willing to utilise new marketing technologies. By introducing the property on-camera the agent can begin a relationship with prospective buyers.

The following video (filmed by Gold Coast company Platinum HD) drives home many of these points, and it’s not even about a property!

Well I’m convinced! So much so that I’ve tooled up to offer real estate video on the Sunshine Coast. Here’s my example…